I’ve just done a blog post for Mother Earth News Organic Gardening blog, called Green Potato Myths and 10 Steps to Safe Potato Eating. You can read it here. it’s an updated version of a post on this site back in December. 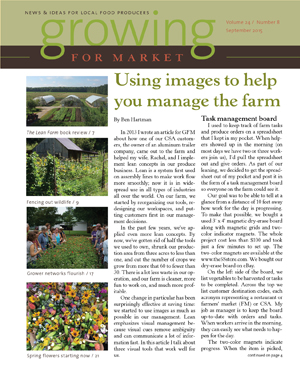 Meanwhile an issue of Growing for Market passed without me writing an article. There’s a thought-provoking article by Ben Hartman on how their farm implemented the Lean system to remove inefficiencies, slim down what they do, focus on the important stuff and make much more money. This has also been fun. One aspect is using pictures rather than lots of words to show what to do (eg how the workspace should look after clean-up). Also visual cues such as colored magnets, rather than printed checklists. Ben has written a book, The Lean Farm: How to Minimize Waste, Increase Efficiency, and

Maximize Value and Profits with Less Work. It is reviewed by Lynn Byczynski in the September issue. Here’s what the publishers (Chelsea Green) have to say: “Using examples from his own family’s one-acre community-supported farm in Indiana, Hartman clearly instructs other small farmers in how to incorporate lean practices in each step of their production chain, from starting a farm and harvesting crops to training employees and selling goods”. – See more here. It’s about how to work smarter not harder, and avoid burnout. This is a good time of year to look forward to reading a book like this, no? We’ve all been pretty exhausted here, slogging through the heat of August with not enough workers. We did take notes on how to have the fall brassica transplanting go more smoothly and efficiently in future. We finally tilled between the rows for the second time yesterday and broadcast a clover mix. Hopefully with overhead irrigation, the clover will grow fast enough to be big enough to take the foot traffic when we  start harvesting, which will be very soon!

Other articles in Growing for Market include Fences for all types of wildlife by Joanna and Eric Reuter of Chert Hollow Farm. They discuss physical barriers, electric fences, long-term and short-term fences and all possible combinations of these, including hybrids. Oh, OK not the combination of short-term and long-term, but everything else.

Farmer and sustainable development consultant Anthony Flaccavento has published a series of four 5-minute You-tube videos to clarify GMO issues, debunk the false arguments of labeling opponents, and support efforts to persuade Senators and the President to reject the House bill to block states rights to mandate GMO food labeling.  The DARK Act outlawed all State GMO labeling laws, including those already on the books in Vermont, Maine and Connecticut. This bill is a disaster for farmers, consumers, the environment and food sovereignty.

This is the first segment, focused on the fallacy of increased yields from GMOs

3rd segment:  Debunks myth of GMO safety, that there is “no evidence” of health problems