Unable to buy our long-time favorite spinach variety, Tyee, we have tried various other varieties. This winter and spring we compared Avon, Reflect, Acadia, Escalade, and Renegade, in the hoophouse and outdoors. We are looking for a dark-leaved savoy type, with good cold tolerance and good bolt-resistance once spring arrives.

In November and December, Renegade had the largest leaves, so its advantage in central Virginia hoophouses is probably as a faster-growing type.

4/10/18: The plants have not changed much in the last month, although in comparison with the February photo, you can see the leaves are starting to become pointed in shape. We are waiting to see which of the varieties bolts first.

4/24/18: Reflect, Avon, Acadia, Escalade, Renegade. All are now growing thinner pointy leaves and starting to bolt. Renegade has large leaves, but the color is paler than the others and the texture is less exciting to us.

Counting bolted plants along the rows, I found

Acadia and Escalade both had thick, well-textured leaves.

5/1/18. On My final tally date of the spinach in the hoophouse, I counted bolters:

Sowing #4 1/15 (for transplanting inside the hoophouse).

4/25/18: North side Reflect – a bit pointy, smaller than Avon and Acadia; South side Renegade, Escalade, Acadia. Acadia is bigger than Escalade, darker and more textured.

We don’t like smooth-leaved spinach as much, so will maybe drop Renegade – it doesn’t shine on anything else except being earliest, but then becomes less productive.     Acadia did very well, Escalade not far behind. Perhaps drop Avon for hoophouse too. Perhaps continue Reflect, Acadia and Escalade, and do comparisons of the 3 only. Or just grow Acadia in the hoophouse.

Outdoors we had overwintered Avon and Reflect. Both did well.

We don’t like smooth-leaved spinach as much, so maybe we’ll drop Renegade.

Feb 21, 2017 : Spinach overwintered in a coldframe; Transplanting the last Tyee, alongside Reflect and Avon this spring. 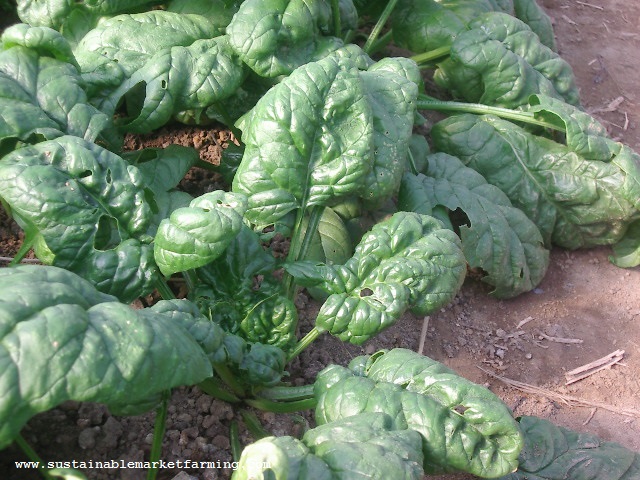