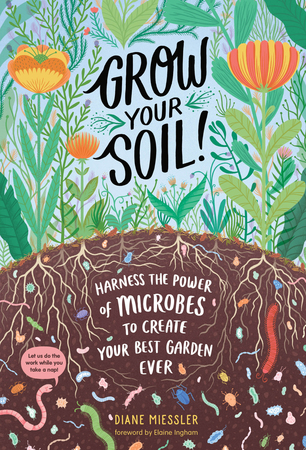 Harness the Power of Microbes to Create Your Best Garden Ever

Grow Your Soil! is an introduction to soil biology and gardening in eight chapters. It is written as if describing how to build a house (but starting with the roof!). Diane Miessler writes in plain English, with a light style, and her book has the endorsement of Elaine Ingham, who writes the foreword, saying that Diane’s humor and tongue-in-cheek joy make this book a joy to read. People were once told that using inorganic fertilizers and pesticides was the only way to grow enough food for a starving world. Elaine simply states “That was a flat-out lie.”

Diane’s encouragement to garden in partnership with the soil food web lists the many benefits of a healthy environment, healthy flavorful food, and the satisfaction of doing what you believe is right. She has a ten-point list of suggestions for creating healthy living soil using no-till systems, lots of mulches, home-grown fertilizers, and by encouraging biodiversity. The fundamentals of soil science are explained – soil is about 45% minerals (sand, silt and clay), 20-30% air, 20-30% water and 5-10% organic matter. A teaspoon of good soil contains more microbes than there are people in the US, more species than all the vertebrates on Earth, several yards of fungal hyphae, a few thousand protozoa and several dozen nematodes (mostly good ones). Soil is our planet’s third largest carbon sink (after the oceans and fossil fuels). Healthy soil is continually pulling carbon dioxide from the air and sequestering it in the organic matter and humus. We want to have as much sequestered carbon as possible, both to reduce the amount in the atmosphere and so that we can use it to grow food.

Diane’s mulch recommendations are to generally aim for a mix of one-third green matter (which feeds bacteria) and two-thirds brown (which feeds fungi), but steering towards more green matter for annual vegetables, more brown for woody perennials, in line with the predominant life-form each type of crop does best with.

The cover crops section first describes the plants, then how and when to use them. I had a brief worry that people would go out and plant buckwheat or sweet potatoes in winter, until I read on! In fact, Diane does suggest you can sow buckwheat whenever you like, and it will be dormant until the right spring weather occurs. In our central Virginia climate this does not work. Buckwheat seed rots in cold wet soil. Buckwheat can germinate in a warm early spring spell and be struck down by a following frost before it has made much growth at all. As always, it pays to discuss ideas you haven’t tried before with nearby gardeners.

This book has a good basic description of the Soil Food Web, for new gardeners or anyone who is a bit mystified about what’s happening in the soil. And for those over 50 whose biology classes only included the two plant and animal “kingdoms”, here are explanations of the classes of bacteria, fungi and archaea, the main types of soil microbes. Archaea are neither bacteria nor eukaryotes (tiny organisms that have their DNA in a nucleus). Archaea are similar to eukaryotes in some ways, but have more resistance to extreme conditions. In the soil they work as decomposers.

Next up are the algae, protozoa and nematodes. The algae spectrum goes from one-celled photosynthesizing life-forms to giant kelp. In the soil they provide nutrients and increase plant resistance to diseases. Protozoa are one-celled animals, which release excess nutrients from their meals of bacteria and fungi, in a plant-available form. They help balance the numbers of bacteria in the soil. Nematodes are (mostly) microscopic roundworms that are mostly benign, from our perspective, and healthy populations keep the destructive nematodes in check. Arthropods (including insects, spiders, mites, ticks and scorpions) are shredders of organic matter in the soil (while eating smaller life-forms).

Bigger soil-dwellers include worms, slugs, snails, and small mammals. By the way, Diane explodes the myth that coffee grounds can control slugs, and claims to have videos to prove it untrue. And she tells us that fence lizards eat harlequin bugs. (I think she lives in California). Western fence lizards are centered in California, and according to the National Wildlife Federation, Eastern fence lizards are found between New York and northern Florida and as far west as Ohio and Arkansas. I want some!

The next section of the book explains Cation Exchange Capacity (CEC), a measure of how many positively charged ions (cations, nutrients like Mg, K, Ca, ammonium) can be held by the negatively charge soil particles. Diane likens this to the pantry. Soils with a low CEC can’t hold many cations, and the key to increasing the CEC is to increase the soil organic matter content. Clay soils may have a high CEC, but the nutrients may be held too tightly to be useful to plants. The solution to this problem is also to increase the soil organic matter content.

Diane offers several ways to increase the organic matter, and one of her favorites is biochar. Biochar in its original form is more or less sterile, not nutritious at all, but in the soil it can act like humus on steroids – it is very good at absorbing water, hosting microbes, reducing plant diseases and lasting a long time in the soil. I have been skeptical about some of the claims for biochar, and of the net gains in reducing global heating. Diane does not make any wild claims (she’s not selling the stuff). She is open about the fact that the mechanism for suppressing disease is not yet understood.

As I said, Diane is not selling biochar. In fact she describes how to make your own on a small scale with an “upside-down” outdoor fire (with all due safety precautions). Big pieces of wood are arranged on the ground in an open airy stack, and a small fire is lit on top with tinder and kindling. This means the fire produces little smoke (all smoke is air pollution). The fire is thoroughly doused with water once everything is glowing but not flaming. Those wanting to make biochar on a bigger scale are referred to a double-barrel biochar burner on YouTube.

The next section is on photosynthesis, minerals and soil testing. Diane describes the effects of too much, too little and just right amounts of the main soil nutrients first. A deficiency of phosphorus shows up as blue-purple colors on the older leaves. She doesn’t mention phosphorus surplus, although she does confirm that excess phosphorus added to the soil will usually be locked up and become inaccessible to plants. Potassium deficiency can cause yellow leaf edges. Next up are other macro-nutrients, such as Calcium, magnesium and sulfur. Calcium deficiency leads to stunted new growth, brown around the edges, perhaps with yellowing between the veins. Bulb and fruit formation can be damaged, as with blossom end rot of tomatoes, caused by insufficient calcium reaching the fruits. By contrast, a magnesium deficiency leads to older leaves becoming yellow between the veins and around the edges, perhaps with purple, reddish or brownish discoloration. Sulfur shortage can lead to “unthrifty” plants. Shortages of any of these can be remedied by the addition of more organic matter.

Micronutrient shortages can also be helped by organic matter, although in Virginia I have noticed that we do sometimes need to add boron on its own (in tiny amounts).

Diane describes how to test soil, understand the results, and remedy the situation. Try adding organic matter first, and only tinker with the specifics if the general remedy is not enough. For instance, if your soil biological activity is low, you may find that piling on organic matter doesn’t help. Use compost to add  some more life to the soil and get a better balance of diners to dinners. There is a helpful one-page “Order of Operations for Fixing Soil”: Correct the pH; correct the calcium level; correct any excesses (usually by adding gypsum); correct the macronutrient deficiencies and lastly correct the micronutrient and trace element deficiencies. Clear instructions like this are so valuable to newer gardeners!

There is a chapter on making compost and compost tea. She suggests thinking of compost as a sourdough starter, and mulch as the flour. Both are valuable, and they work well together. Making good compost is a valuable skill to learn. Try for the a good balance of high nitrogen materials and high carbon materials, with enough water. Turn the pile, assess its progress, add what it seems to need. Rinse and repeat. Diane recommends against spending money on fancy compost bins. “Compost needs love, not a container.” There is value in turning the pile and seeing how it’s doing. If it’s fully enclosed in a tumbler, you might miss the signs that it needs a specific kind of care. Here is encouragement to learn the art and science of compost making.

Worm bins are a great way to use kitchen scraps to produce worms and compost, especially in winter, as worm bins need to be in a non-freezing place to stay alive. I disagree with Diane about using the liquid leaching from the bottom of the bin as a “compost tea” See my review of The Worm Farmer’s Handbook by Rhonda Sherman. This liquid might not be good for your plants. To make compost tea, put some of the wormcastings in water and bubble air though it. Instructions are in Diane’s book a few pages later.

Another small industrious worker is the black soldier fly. The (harmless) maggots of these (harmless) flies will out-compete other (disease-carrying and/or biting) flies in eating up kitchen scraps in an odorless way. They are also a favorite food of poultry, and there are clever ways of setting up a bsf bin so that the pupal stage will “self-harvest” by walking up a ramp and dropping into a collecting box. See YouTube for all the details.

After explaining these various aspects of growing good soil, Diane pulls everything together into a chapter on Building a Garden That Feeds Itself. Here you can learn about sprinkler irrigation,  mulching, planting, and selecting good tools. The next chapter covers being a good neighbor, by having a good-looking, good-smelling, productive garden that gets frequent attention. Diane advocates for pulling weeds and dropping them on the bed, without worrying about weed seeds or plant diseases. I can see this would work best in a smaller garden where things don’t get out of control, and in drier climates with fewer diseases and less chance for weeds to re-root. There’s a panel about roses that I didn’t read. (Roses are a great trap crop for Japanese beetles; I’m not a flower grower!)  A big help to beginners is the glossary at the end, and the bibliography of books on soil life.

If you are a beginner organic gardener, or you’re looking for a book for someone in that category, this book has a clear user-friendly approach. It won’t scare off newbies with too much detail.