This was Day 7 of my January 2020 Agroecology trip with Organic Growers School. This day we studied ecology, climate change, the effects of extractive agriculture, deforestation, reforestation and responses including Bioreserves and urban permaculture gardens.

To read other posts in this series, click the Cuban Agriculture category. Click this link to see a short video about the OGS Cuba Agroecology Tour. It goes live on April 14.

After breakfast at our casa, we rode our tour bus to FANJ (Antonio Núñez Jiménez Foundation for Nature and Humanity), a non-governmental cultural and scientific institution, dedicated to the research and promotion of environmental protection in relation to culture and society. We were given a tour of the museum and library. Roberto Pérez Rivero, the PNS-FANJ Director, gave us a talk “Cuban Environment, the challenge of climate change and development: an environmental education approach.” It covered science, urban agriculture and food security in Cuba.

We sat in the library around the glass topped tables of artifacts.  National treasures and plastic lawn chairs!

There are 11 million Cubans, the population is not growing. The island of Cuba is only 30 miles wide at the thinnest point, and so the country is heavily influenced by the ocean. There are three or four ecosystems: sand beaches, mangrove swamps, bush (shrubs) and trees, seagrasses [maybe seaweeds?].

Biologically speaking, Roberto Pérez Rivero says the Caribbean is a province of the Amazonian Rainforest. A big project associated with FANJ was a journey in a large hollowed tree canoe, from the Amazon to Cuba. I didn’t understand everything. We saw the canoe and some photos and various artifacts from that trip.

In the eighteenth century, ship-building was important in Cuba. There was a “Forbidden Forest” reserved for shipbuilding. In 1769, the Santisima  Trinidad was built in Havana, and was possibly the largest warship in the world at that time. It fought on the Spanish and French side against Britain in the US War of Independence.

No gold was found in Cuba, so the colonizers made plantations of several crops. Two species of tobacco, Rustica and Virginia were hybridized. Haiti had been the main coffee producer in the region, up to that point. Sugar cane came later on, from New Guinea, in the time of Columbus.

The Toxic Acids of Cuba: Rum, Tobacco, Coffee and Sugar.

There used to be three enslaved people (they say “slaves”) per white person. The plantation system shaped the environment. 90% of the land had been forests of all kinds. There were edible rats (vegetarian) living in the tree canopy, but no monkeys. By 1816 there was deforestation around the cities, but still 87% coverage overall.  In 1909 there was only 54% tree cover left; in 1959 it was down to only 14%. The Cuban people (not the IMF!) worked on reforestation. In 2018 there was 32% tree cover (going up!)

There are 26 types of forest in Cuba, a “miniature continent”, including 4 areas of pines. This is the southern limit (20°N) for pines, which don’t grow in tropical areas [such as Jamaica, as I’d noticed on my trip there.] There are 40 million arable acres. Article 27 of the Constitution of the Republic of Cuba, 1996 revision, lists environmental problems:

Bioreserves of the Biosphere: There are six Natural Areas designated as Reserves. Fishing is illegal if from a Styrofoam raft. [? I cannot explain this part of my notes!] Another speaker told us there is no fishing industry in Cuba – fish is imported.

Cuba reduces the threat of climate change by making preparations. They have 72 hours to prepare before each hurricane, thanks to Russian radar. The mangroves act as a “Live Task Force”and block storm surges.

“Dinosaurs did not go extinct, they evolved into birds” Birds can fly away. Roberto Pérez Rivero is an Informed Optimist. The Apocalyptic Vision doesn’t serve us.

There are many videos of permaculture talks by Roberto Pérez Rivero in the period 2006-2017.

2006: The World Wildlife Fund, In its 2006 Sustainability Index Report, using a combination of the United Nations Human Development Index (a measure of how well a nation is meeting its nutrition, water, health care, and education needs, etc.) and the Ecological Footprint (natural resource use per capita), determined that there is only one nation in the world that is currently living sustainably — and that nation is Cuba. The Report states, “No [other] region, nor the world as a whole, met both criteria for sustainable development.”
2007: View the 53 minute Cuban Permaculture documentary, The Power of Community: How Cuba Survived Peak Oil...Cubans share how they transitioned from a highly mechanized, industrial agricultural system to one using organic methods of farming and local, urban gardens after they lost global support in the early 1990’s. Roberto Pérez, a well-known exponent of this Cuban approach to ecology, can be seen in this documentary.
2008: Roberto Pérez tour of UK
2008:BBC programme on Cuba’s permaculture gardening

The BBC’s Around the World in 80 Gardens (2008) (viewable only in the UK) introduces the urban organic food gardening revolution in Havana, Cuba.

A lively 73 year old farmer, Jésus Sanchez, runs a permaculture backyard garden as an educational center, with training from FANJ.

They have some small caged livestock, a composting toilet, vegetable beds following the Permaculture Guilds system, a shaded outdoor classroom, lots of explanatory posters and a model of the garden.

I was surprised to see the vegetable beds edged with upside-down glass bottles! [We have a “no-glass in the gardens” rule at twin Oaks, to avoid cuts.]

They had some plants growing on their house roof, where a few people at a time could view them. or get an overview of the garden.

See Learning About Permaculture at La Felicidad in Cuba, one of the Franny Travels to Cuba YouTube channel offerings. Franny was part of our January 2020 tour group.

Lunch on our own: I don’t remember what or where I ate. Or what I did in the afternoon. I probably ate my leftover pizza at the casa. I might have done some emailing. I’m surprised I didn’t write anything down. It’s hard to imagine I frittered away a whole afternoon of this special time! But I do remember dinner at the Garden of Miracles (Jardin de los Milagros Paladar) farm-to-table restaurant, with a guest speaker, Rafael Betancourt. I’ll tell you about that and their rooftop garden, another time.

In early January 2020, I was part of the Organic Growers School Agroecology Tour of Cuba. I have already posted about a couple of the places we visited. Click the category Cuban Agriculture. Here I will tell you about Finca Marta in Artemisa.

After breakfast at the casa particulare where we stayed, we gathered at 9 am to ride our bus to Finca Marta, a wonderful agroecological farm.

Fernandito Funes Monzote provided a talk on agroecology  in Cuba and a tour of the farm. Finca Marta is a very tidy, productive, well-organized, sustainable, beautiful farm. The terraced stone-edged vegetable beds grew many kinds of lettuce, kale, mustards, arugula, mizuna. [I wonder why callaloo isn’t grown in Cuba, as it is in Jamaica].

Finca Marta has 720 hives of Italian/Spanish honeybees, which produce 10 tons of honey each year. Because there is no cold weather, bees fly all year, and they are not troubled by Colony Collapse Disorder. Also no Varroa mites, or tracheal mites. Their hives spend several months at the coast, gathering mangrove nectar. They spend several months in the mountains, gathering nectar from a kind of morning glory, then the winter on the home farm. We were encouraged to gear up and look in the hives they were inspecting, and observe the honey house and the van they use [as a mobile workshop?]

Finca Marta has a stone barn for two mares, 4 cows and geese. The livestock are closed in every evening. In the morning, the barn is washed down, and the manure goes out a drain into a temporary holding pond. After stirring the manure, a gate is opened, letting it into a closed tank. The resulting methane is piped into the kitchen as a cooking fuel, and the slurry continues to settling tanks, later becoming fertilizer for the gardens.

They have greenhouses and hoophouses covered with shadecloth or insect netting, not clear plastic. One is for seedlings in 13 x 20 Speedling-type plug flats. Others were growing tomatoes and cucumbers.

Mostly greens are being grown in the outdoor beds (it was winter when we were there). They sell to restaurants. They have some drip irrigation, but also spend 2.5 hours each day hand-watering. They also grow cassava and taro.

The centerpiece was a leg of pork which had been roasting in an earth oven since 8 pm the day before. There were many vegetables grown on the farm, fruit juice, wine and beer. This was a particularly good meal.

After lunch we worked for a short time on a service project. We harvested hibiscus flowers (aka Roselle, Jamaica, Sorrel) from pruned off branches. These get dried and sold for tea (think Red Zinger).

A question by a reader prompted me to look on the web, where I found a slideshow in English. If you can read Spanish, there is more info online.

For more on Finca Marta, see Agriculture for Life by Fernando Funes 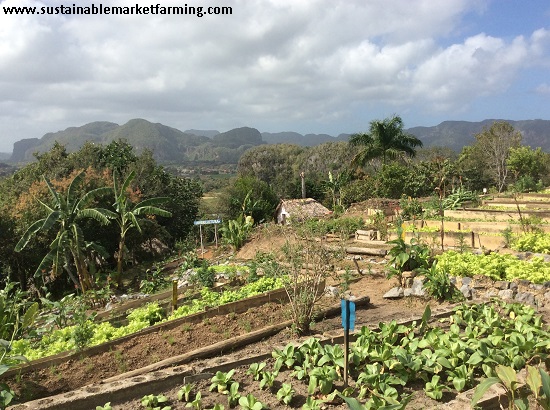 I’ve just got back from a wonderful Agroecology Tour of Cuba with the Organic Growers School. Click the link to sign up for the 2021 tour. I have lots of photos and much to say, but so little time today! In 9 days we visited 9 farms, had several speakers address aspects of life (and particularly farming and environmental issues) in Cuba, had a couple of walking tours, ate many delicious farm-to-table type dinners and still had time for a salsa lesson 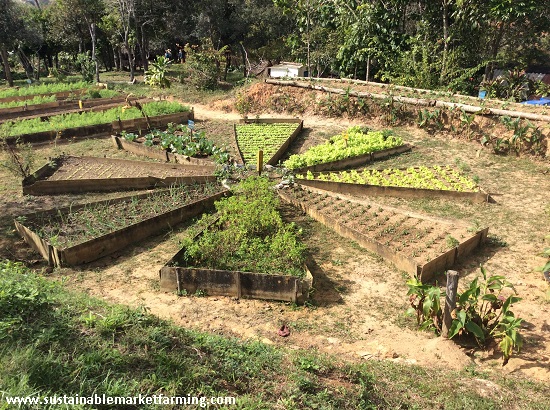 We are having trouble with our internet connection today, so this post will either be short or very short.

Go to my Events Page for a full list of where to look for me. Not long after getting home from SSAWG I’m headed to PASA in Lancaster, Pennsylvania

Then OAK, in Louisville, Kentucky,