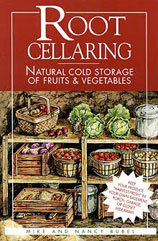 The weather has heated up, the squash and cucumbers are growing well, and the combination leads to irritation from prickly leaves on sweaty skin. Some people get quite a rash from harvesting these crops, others just get a short-term itchiness that is cured by rinsing arms and hands in cool water. We’ve come up with a few helpful techniques.

The first is fairly obvious: wear long sleeves for this task. Keep a suitable cotton shirt handy (near the harvest knives) to slip on before you start. But sometimes it just feels too hot. Gauntlets are another option. We have two pairs of these white plastic sleeves with elasticated ends. We keep one in the hoophouse, clothes-pinned to the rack by the logbook

I don’t know where we got these. It’s very quick to slip them on and off again, keeping the “enclosed” time to a minimum. They are just tubes, they don’t have gloves attached like the ones I used to wear when I kept bees. They are sold as “protective sleeves”, and they look like these or these (see the photo above).

Probably cutting sleeves off an old shirt and hemming and threading elastic in the top end would work.

For cucumbers, we have introduced the use of a pole to rummage in the vines, seeking mature cukes. This is a surprising improvement over using hands or feet to find the fruits. It does little damage, and you can easily feel when you hit a cucumber. The small amount of  time it takes to pop the cucumber off the vine is not long enough for skin to get irritated (for most of us). Also, cucumber vines are closer to the ground than squash vines and leaves, and so your arms don’t get scratched.

My blogpost on this topic has been published on the Mother Earth News Organic Gardening blog. You can see it here. It is based on material in Sustainable Market Farming and in my new book The Year-Round Hoophouse. The post covers germination temperatures, soaking and pre-sprouting seeds.

If you are looking for a reliable source of tried and tested information on Sustainable Agriculture of any sort, try ATTRA Tutorials

“Two new courses outlining Farm Energy Efficiency and Scaling Up for Regional Markets are now available from NCAT/ATTRA. And we’ve added a new quiz feature to each of our tutorials. Each lesson includes a quiz that will test what you learned in that specific lesson. If you successfully pass all quizzes, you’ll get a certificate demonstrating your knowledge!”