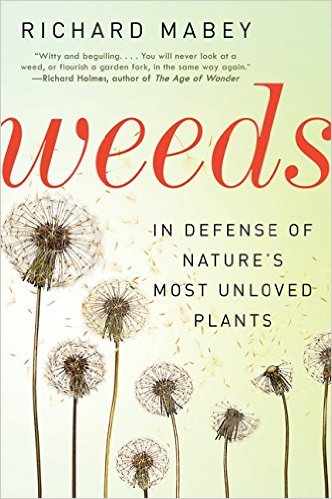 Richard Mabey has just had a new book published (The Cabaret of Plants) but I am behind the times, and another of his books, Weeds, has been my delightful summer reading. Weeds was published in the US in 2012, after a 2010 publication in the UK with a different subtitle. I remember enjoying his book Food for Free in the early 70s, when I was a student about to embark on my adult life. He is probably Britain’s foremost nature writer.

This is a lively book, full of strange tales, literary references, fascinating rich details, reflections on civilization, and musings on what might have been, given a different wrinkle of history. It is about weeds in relation to people: cultural history and botany, global travel and trade, pharmaceutical research and the avid gardening of exotics. There is a good 9-page glossary of common and Latin weed names, 7 pages of notes and references and a very well-crafted, thorough 15 page index.

Each of the twelve chapters has the title of a weed (real or fictional), and a beautiful line drawing. Confusingly, this is sometimes a different weed, or the one of the title is lurking in the background of the drawing. Richard Mabey says “Weeds are our most successful cultivated crop.” He disagrees with Michael Pollan who said that “as weeds may be, they cannot survive without us any more than a garden plant can.” Mabey is confidant they’d survive without us!

Richard Mabey’s story starts in the mid-60s in outer London, near Heathrow Airport, where he had an editing job in a derelict area of gravel pits, Victorian rubbish dumps, scrap yards and a dirty canal. In summer, he walked there in his lunch breaks. The area became a green jungle including “immigrant plants from three continents,” as a result of seeds brought there deliberately or accidentally. Weeds green over the dereliction we create. One role of this book is as a defense of weeds, an appeal to regard them more dispassionately, perhaps helped by the tales of how they got here, or why, or when.

In 1855 Richard Deakin wrote the Flora of the Colosseum of Rome, and listed 429 species of wild plants on the 2000 year old ruin, including 41 members of the pea family. Some of these plants were rare in Western Europe and may have arrived in the fur of the North African animals brought there for torturous combat with gladiators. Fifteen years after this book, Garibaldi’s government ordered a big clean up and almost all the plants were removed.

In 1877 a well was sunk 1,146 feet in London, down to 500 million year old rocks. In those Old Stone Age layers were fossils of some weeds we still have today.

At the beginning of the twentieth century, Edward Salisbury found a new weed growing on a heap of flints: ragweed imported with the flint ballast from a US ship. He also found blue pimpernels in his newly-claimed-from-turf garden in Radlett, Hertfordshire, plants which had not been seen in England for a hundred years. In 1945 he listed 126 bomb site plants.

Charles Darwin dug a 3 foot by 2 foot patch and observed the germination of 357 weed seedlings (boo!). 295 were destroyed by slugs and insects (yay!). And while we’re counting species, it has been reported that the stomach of Graubelle Man, one of the Iron Age Bog People, contained seeds 63 weed species, along with barley and linseed, possibly a ritual last meal before being sacrificed. 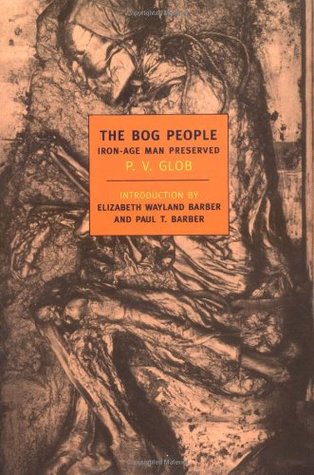 During World War II, unusual weeds erupted on London’s bomb sites. “A weed storm, a reminder . . . of how thinly the venue of civilization lay over the wilderness,” says Mabey. Poppies germinated on Europe’s battle fields wherever the soil was disturbed (by digging trenches, or by dropping bombs.) In 1964-71 the US sprayed 12 million tons of Agent Orange over Vietnam. It killed entire rainforests and laid low very many Vietnamese people. 80 years later, the forests have still not regrown. The vacuum has been filled by Cogon Grass, which used to grow along forest edges. Relatively recently, Cogon grass reached the southern US in the packaging of imported Asian house-plants. Is this some botanic poetic justice? Cogon is number 7 among the world’s worst weeds. It even overwhelms bamboo.

In the 1980s, Graham Atkins found a barnful of topsoil that had been intended to restore a quarry when it was worked out and returned to agriculture. A test patch grew weeds that had not been seen for decades. Dock seeds germinate after 60 years, lambsquarters (fat hen) after 1700 years, weld (dyer’s rocket) after 2000 years burial. The seeds can go dormant deep in the soil profile.

The UK spent £70 million to clear Japanese knotweed from the 2012 London Olympics site. All plants in the UK are female, and clones of earlier arriving pieces.  This weed can spread 6 feet down and 20 feet sideways in a single year. Ground Elder roots can go down 30 feet, and it can grow 3 feet sideways in a single season. In what I take to be a “know thy enemy” move, this weed has been charmingly named Grelda by Richard Mabey’s partner Polly, with whom he lives in Norfolk, England.

Richard Mabey has a lot of life experience, which shows in his broad-ranging literary, historical and cultural references (including Virgil’s account in the Georgics of Jove’s creation of weeds, weeds in Shakespeare, in John Clare’s poems, and Elizabeth Kent’s essays). Enough stories of weeds for now – on to weed management, a topic of great concern to gardeners everywhere. In Europe in the Medieval Period, weeds were not hoed, but individually hand pulled with the aid of two sticks, one forked, one hooked.

This is not a book prescribing weeds as medicine, although the topic receives some attention as history. Sympathetic Magic – plantain leaves to heal crushing and tearing injuries, because plantain leaves bounce back after being crushed. The 17th century Doctrine of Signatures, a very human-centered approach to weeds (they exist for our benefit) suggested that dandelions have yellow petals not because yellow attracts insects, but to tell us it is useful for urinary disorders. Most herbal medicine these days  is based on observed effectiveness, although it may be surprising to learn that some of the Doctrine of Signatures beliefs still hold sway.

The chapters meander weedily from one topic to another. There are many fascinating tales of how plants came to be imported to the UK. Kew Gardens received a gift of Galinsoga parviflora (named after a Spanish botanist) in 1793. It escaped in the 1860s. “Oxford ragwort” (possibly brought from Mount Etna in the mid-18th century) escaped after about a hundred years in the Oxford University Botanical Garden, and after another 50 years, was found in much of the south of England. It then spread across bomb sites in the 1940s, presumably bomb craters offered similar conditions to volcano craters.

Britain was landfall for huge numbers of foreign plants, and the Kew Gardens collection of drawings and dried specimens has been analyzed by mineralogists for mineral content to determine where best to mine certain minerals. Other industrial “spin offs” from weeds include the inspiration for Velcro found in burdock seed heads. For reasons lost to us, burdock was a popular plant in landscape painting in the 17th and 18th centuries.

In 1638 and 1663 in the US, John Josselyn published lists “Of Such Plants as Have Sprung Up since the English Planted and Kept Cattle in New England“. There were 22 species.

And in the US today, lawns apparently occupy an area the size of Iowa, and lawn grasses are the most highly sprayed crop, (including both herbicides and fertilizers). Such is the price of Fear and Loathing of Weeds.

Weeds sometimes get moved accidentally, and grow in their new homes after calamities. Sometimes they are imported as exotic garden plants. Sometimes a rare woodland plant like Rosebay Willowherb (Fireweed) takes off when new opportunities arrive, such as stony track-beds of railway lines, fire sites and bomb sites. The plant adapts over time.

Such flourishing adaptations feed into real and imagined worries about herbicide-resistant SuperWeeds, sci-fi weeds like triffids, cross-over genetically engineered weeds and escaped GM crops like canola. Every now and then an especially troublesome weed rises to the top of the worry list. In 1970 in the UK, children were erupting in facial blisters and welts. It was a fad that summer to use the hollow stems of Giant Hogweed as telescopes, whistles and blowpipes. Giant Hogweed, like its relative Wild Parsnip, contains furocoumarins, which are activated in sunlight and then cause skin damage. Giant Hogweed had been around since the early 19th century, but no-one had thought to play in the sunshine and touch the stems to their eyes or lips. As a result, the UK Wildlife and Countryside Act of 1981 made it an offence to tolerate the growth of this impressive 12 foot tall plant with cart-wheel sized flowerheads.

A Weed Extermination Industry followed in the wake of government legal attacks on weeds. The UK Environmental Protection Act of 1990 classified Japanese Knotweed as “controlled waste” and made public money available to help with extermination. Businesses flourished, spending the funds on lavish websites, conferences and manuals. There were strict protocols (rituals, exorcism rites), a step-by-step process, a correct time of year for action. The UK Finance Bill of 2009 allowed tax relief of 15% on costs of removing knotweed from “contaminated land”. Extermination companies took advantage by raising their price for clearance to more than £50/square meter. Then a tiny sap-sucking insect was found which shows promise as a biological control.

Was the Japanese knotweed panic justified? No, says Mabey. The method of tallying noxious weeds used 10km by 10km squares. The incidence was 83% of squares infested in the worst areas. But looking instead at 2km x 2km squares reduced the incidence of infestation from 83% to 29% of squares.

Some panic about invasive aliens is misplaced. Or rather, the affection felt for natives is misplaced. In the UK, many plants considered valuable natives are not so: horse chestnut, snowdrop, many modern cultivars of daffodil, Alexanders. Beware not only of unrealistic ways of measuring, but also of false sympathies and snobbery. In 2005, Ted Green wrote a provocative paper arguing that climate change ought to make us “rethink the relevance of taking a dogmatic position on native and non-native trees.” Evolutionary survival strategies of non-natives may counter the unpredictable demise of other species.

I was particularly interested in one of the examples of plants reclaiming urbanized spaces. The New York High Line, Detroit and Chernobyl are other examples, but because I live in an intentional community I was intrigued by Plotland, a community near Basildon, Essex, which was established at the end of the 19th century, during the agricultural depression in the UK. It consisted of self-built chalets and shacks, and at the height of it’s success, there were 8,500 homes, each with a vegetable plot.

Sadly, the water and sewage systems were found inadequate, and in 1949 the Plotlanders were rehoused in Basildon New Town. Most of the buildings were cleared by the mid-1980s, under a plan to reinstate the area as farmland. But the steep site and the poor soil meant there were no buyers. In 1989 the Development Corporation declared the ghost town to be  Langdon nature reserve.

And now the UK has a Biodiversity Plan – there is government support for increasing the population of 20 arable weeds, some of which were regarded as pestilential nuisances 300 years ago. We have come to understand the need to accept the existence of weeds. Herbicides have made some of them resistant, some of them rare. We need to balance practical control with cultural acceptance. We get the weeds we deserve.