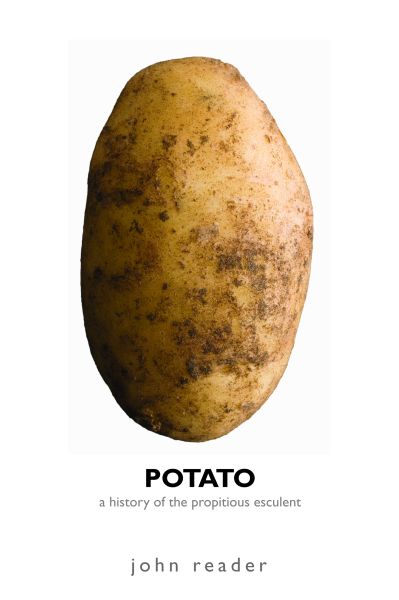 I came upon this book by chance. The Economist said “The spud now has the biography it deserves.” I thoroughly enjoyed reading it, and appreciated the way John Reader explores the whole picture – history, farming, politics, science, nutrition, greed, deceit, compassion, generosity, climate change, global food supplies, population growth, land ownership, colonialism and hopes for the future. His style is clear and engaging. Unfortunately the book is out of print (it deserves a reprint!), so try your library or look for a used copy.

This review is long. I used the “Read More” button for the first time. There are also more photos in the second part. While writing this I remembered that Carol Deppe has good things to say about potatoes. Read a post I wrote about her perspective.

This book divides into three parts: the first tells of the potato’s origins in South America; the second the impact of importing the potato to Europe, and the third, how the potato spread throughout the world, finishing with a chapter on China, currently the world’s largest producer and largest consumer of potatoes. Measured in tons per country, not girth. NASA plans to supply astronauts one day, on the three-year trip to Mars with various “home-grown” crops. Potatoes will be the star of the garden, using the astronaut-exhaled carbon dioxide to grow, and providing a fresh supply of oxygen as well as all-they-care-to-eat potatoes.

Back in the Andes, where potato ancestors grow wild, at least 400 varieties are cultivated. They divide into three distinct groups, for growing at different altitudes: 3000-3500 metres, 3500-4000 metres and above 4000 metres. The International Potato Center (CIP), which has headquarters in Lima, is an internationally-funded scientific research organization aiming to increase food security and reduce poverty in the developing world. Their Peruvian station preserves potato genetics.

Although potatoes tend to be denigrated as “pure starch’ and “empty calories” in developed country, these opinions are far from the scientific fact. The ratio of carbohydrate to protein in potatoes ensures that anyone eating enough potatoes to fulfil their energy needs will automatically get enough protein too. In addition there are significant amounts of various minerals and vitamins. For example, 100 gm of potato provides half the daily requirement of vitamin C. Potato protein is of high biological value (easily absorbed and retained), second only to that in eggs. The starch provides a steady stream of energy, healthier than the rush from sugars and fats. And compared to many food crops, the percentage of the total biomass that can be eaten is very high, at around 75%. Compare with grains at 33% of the mature plant total. An efficient use of land, water and labor. If needed, people can maintain an active working life for months, eating 2-3 kilos of potatoes a day, with a little fat, and nothing else.

Potatoes have been bred to adapt to many different climates. Today, potatoes are grown in at least 149 countries, from latitude 65°N to 50°S, and from sea level to higher than 4000 metres. Only wheat, maize and rice are globally more important food crops. No, not soy.

Potatoes have changed the course of history and evidence of potatoes has changed the interpretation of history. Around 10,000 years ago, in many parts of the world, agriculture began, perhaps following a period of global warming, glacial melting and sea level rise, itself followed by ten centuries of dry, even arid conditions. We don’t know exactly. We do know that the rise of agriculture went along with development of civilizations fuelled by development and growth of a staple food. Potatoes were that food for Andean civilizations. Contrary to the long-held belief that the Clovis culture of 11,200 years ago was the oldest in the Americas (people having migrated across the Bering land bridge from Asia), the Monte Verde site in Chile has been dated at about 12,500 years old. The artifacts include none of the Clovis spear points, but mastodon bones with cut marks, clay-lined hearths, remains of food plants including potatoes. This site is older than any site in North America, suggesting these people did not reach the Americas by crossing the Bering bridge, and rapidly moving a long way south. The boggy conditions at Monte Verde preserved soft organic matter, not merely bones and stones. Assumptions that the residents were nomadic hunters were disproven. How often have early archeological digs suggested a “Man the Hunter” life, because evidence of agriculture has rotted away?

Tiwanaku, the first state to be based on raising potatoes, lies in present day Bolivia. The site is 3845 metres above sea level. In its heyday, between 800 AD and 1200 AD, it was a powerful empire. Llama herds provided meat, transportation and fuel. The author is careful to avoid the Man the Hunter mindset. Plant foods enabled the people to settle and thrive. Potatoes, quinoa and kañihua were important crops. Agriculture was undertaken judiciously, using ridged fields to keep the land frost-free. (The ditches held water which moderated the soil temperature on cold nights by as much as 6-9 Celsius degrees.)

It isn’t known exactly when potatoes were first introduced to Europe, perhaps 1588 in Belgium, perhaps 1586 in England, certainly by the early 1600s. A poster from 1664 recommended planting potatoes to feed the family, or to sell. However, not all market farmers jumped at the chance. Some thought radishes or turnips a more worthwhile crop. It took a couple of centuries before the potato became Europe’s most widely consumed, cheap, nutritious food. This wasn’t simple prejudice about new foods – the first potatoes to reach Europe were not adapted to the growing conditions, where the day length varies much more than in the equatorial Andes. The plants produced lots of stems and leaves all summer, then struggled to grow tubers in the falling temperatures of late September. Word spread of disappointing yields. But the Spaniards in the Canary Islands had been developing adapted varieties, and this lead to better results. END_OF_DOCUMENT_TOKEN_TO_BE_REPLACED