For some years, I have been keeping a list of temperatures at which various crops get killed by cold weather. I update it each winter, and with two nights in the past week below the 14F we experienced on Saturday 11/15, I’ve started on this year’s update.

See my 2013 posts about what survived when:

After the night at 14F (10F degrees colder than any previous night this season), the Cylindra beets were still OK, the Danvers carrots too. Our Tribute and Kaitlin cabbage were OK. All our broccoli shoots were rubbery, and knowing colder weather was coming soon, we went ahead and did one last harvest. We also harvested all the beets (we didn’t have many this year).

On the night of Tuesday/Wednesday 11/18-11/19 we got a brutal 10F. As often happens, our cold-weather low was 5F degrees colder than our nearest weather forecast station at Louisa Northside. After the 10F, there was a lot of damage. Some of the Tribute and Kaitlin cabbage had freeze damage. We made a big batch of kimchee from the cold-damaged cabbage. The Melissa savoy and the Deadon cabbage looked OK.Some of the senposai leaves have frost-killed patches, and most of the bigger chard stems got frozen. None of the plants are dead though.The Ventura celery under thick rowcover sustained quite a bit of damage. The Morris Heading collards are fine.

The winter radish (daikon, China Rose and Shunkyo Semi-long red-skinned radishes) were all OK, and we decided it was time to harvest them anyway, rather than risk forgetting them.

We have one bed of outdoor lettuce left, with thick rowcover. The Outredgeous was a slimy mess, the Olga romaine damaged but good inside. Still looking good were Salad Bowl, Red Salad Bowl, Red Cross, Winter marvel, Sylvesta and Pirat. Add those to your list of cold-hardy lettuce varieties.

Various patches of oats sown in August and the first half of September as winter cover crops have all suffered some damage. Not a complete kill, but some bleached downed stems. For many years, I mistakenly believed 20F was the kill temperature for oats, and repeatedly forgot to track what actually happened.  Now I’ll think of 10F as the beginning of the end for oats.

Our biggest worry was the carrots.We had 5 beds 180′ long with 5 rows in each. 4500 row feet of carrots, with one every 3″ – 18,000 carrots to dig by hand. We considered what to do during the day on Tuesday, before the cold night. We had cancelled the shift on Monday due to rain, and Tuesday was very cold and windy. If we harvested some on Tuesday, it could only be a small percentage of the total. and then we’d have to deal with them on Wednesday. We considered putting a load in the truck and driving the truck into the garage for the night, where there is a woodstove. (Meanwhile we were part-way through planting garlic). I didn’t want people to be outdoors for longer than necessary on Tuesday. The forecast was calling for 17F, meaning 12F was likely here. That’s the temperature I expect carrots to die at. But rowcovering them all in windy weather didn’t seem like an option. Overhead irrigation was almost unthinkable, as we’d stored away all the hoses and sprinklers. I watched the forecast. It crept up one degree. I decided to do nothing except cross our fingers, hoping the foliage would protect them for one night, and that the forecast might be “warming” slightly. But by 7pm the forecast was for 16F. I felt quite stressed. Losing all our winter carrots was an awful possibility.

Were the carrots frozen? After the 10F night, the leaves were very flopped over. I pulled a few carrots and sliced them. It was hard to tell. They did have a glassy margin around the edges. It takes a bit of time for frozen plants to “declare themselves”, so I looked again on Thursday. Many leaf stems showed bleaching caused by the cold temperature, and the leaves remained flopped over. I consulted with two of our main crew people, and we decided to wait till Monday, by when it should be obvious. We considered and discounted various versions of trying to harvest them in a hurry and finding a use for so many frozen carrots before they started to rot.

Meanwhile I went to the fridge and got some carrots we’d had in storage since the summer. When I sliced them, they looked just the same as the ones outdoors – translucent edges are normal!! So we decided to start harvesting as soon as possible (Friday). We’ve had crews on the job for three afternoons now, and we have harvested about three-quarters of them. They look great! Very little bug damage. (For some years we’ve been wondering whether we have carrot rust fly). No rodent damage. And happiest news yet – our soil has improved enough that we rarely needed to dig them. Mostly we could pull them, which is so much faster.

We’ve been debating the relative efficiency of several methods. My favorite is to pull the carrots, put the handfuls straight into carts, haul them to the washing area. Then snip the tops off with scissors and wash the carrots. Others favor laying the pulled carrots in piles in the field, cutting the tops off there, and bringing the trimmed carrots to the washing station. We have been timing ourselves. It’s a question or reducing how many times we handle them versus hauling the carrot tops away then bringing them back. (We spread the tops thinly over the beds to protect the soil from heavy rains, as it’s too late to sow cover crops now). 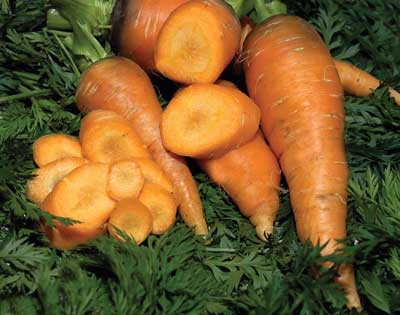 Next, we may get snow tomorrow night. But I’m not worrying. A cover of snow won’t hurt any remaining carrots. I’m done worrying for this week!