Root Crops to Plant in Central Virginia in March

As soon as the soil is dry enough and not frozen, we spread compost on the raised beds we plan to plant in February and March, and till in the compost. We make ourselves a Spring Start-up Plan, so we know where to focus our energy when the weather gives us a chance.

This means in January we compost and till beds for spinach, turnips and our first carrots. In the first half of February we till the turnip beds and any beds of winter-killed oats cover crops that we will be planting soon. We compost the first lettuce bed, the kale and collard beds, and those for cabbage, beets, more carrots, senposai and peas (all have planting dates March 9 to 15). In the second half of February, we compost the third carrot bed and till the ones we already composted. In early March we till the third carrot bed.

Once we get to March, day length has increased and temperatures are starting to climb. There is a noticeable increase in the rate of germination and growth (unlike for our February sowings, which are rooted in faith and optimism!) All being well with the weather (it’s extremely wet this year!), in early March, we direct sow turnips (3/6- 3/16), and radishes #1 (Cherry Belle or some other fast variety)

We plant potatoes when the daffodils bloom, usually mid-March. Last year I wrote an extensive series of posts about growing potatoes.

See Planning to Grow Potatoes Again, the last part of a monthly series on growing potatoes, a dietary staple.

Beets are workhorse root crops that thrive in mild weather, store well, and are popular traditional foods. They are crops that can provide high yields for the time invested.

Beets come in several types, round, top-shaped and long. The size and quality of the greens is a factor if you sell bunched beets with tops, or use the tops for greens. We like the 6” (15cm) long Cylindra/Formanova/Forono ones (55 days to maturity, OP). They are very tender and easy to cut into regular slices, for pickles or cooking. The skins come off easily, and the flavor is very sweet and the texture tender.

Among round ones we like Ace (50 days to maturity, F1 hybrid), and Detroit Dark Red (60d), a tender open-pollinated variety. Detroit Crimson Globe is said to maintain better flavor in hot weather than most others, which can develop off-flavors. Early Wonder Tall Top (48d), is also open-pollinated. Lutz Green Leaf (70d) is a big long-storage variety. There are also golden beets, white beets and candy-striped Chioggia beets, although in my experience, what they gain in appearance they lose in flavor and tenderness.

Beets need a pH of 6.0-7.0, preferring 6.5-6.8.  They require abundant potassium, which can be supplied by woodash. Boron deficiency can show up in beets as internal browning, or dark dead tissue, as well as distorted leaf growth. It is most likely to occur in alkaline soils after long hot, dry spells. Beets can suffer from “zoning,” (white rings in the roots), if there are acute weather fluctuations.

Sow beets whenever the soil is between 50°F (10°C) and 95°F (35°C), so long as you can keep the surface damp. With beets we do a single sowing in mid-March and more in early August. We are growing for fresh use, pickling and storage, but not bunch sales, so we don’t need to do frequent sowings. For a continuous supply of greens and baby beets, sow every 2 weeks from spring until 8 weeks before regular frosts usually occur, or about 10 weeks before a heavy freeze is expected.

It is important to get good soil contact for the corky seedballs, so tamp or roll the rows after seeding. Keep the rows damp, by watering as needed for the 5-17 days they take to emerge. Beet seeds are actually seed balls (clusters of seeds) so each one you plant will produce several seedlings right next to each other. “Singling” the beets is an important step, and they will benefit from hoeing, thinning and weeding. Beets deal with weed pressure and crowding a lot better than carrots do, so if you have to choose which to weed, the carrots win! We thin in stages, so that at the second thinning, the baby beets can be used as a crop.

This info about growing beets is excerpted from my book Sustainable Market Farming. See the book for more on pests and diseases, harvesting and storing, and seed saving.

In our climate, beets are one of the crops that can be sown in spring and again in early fall (actually August for beets here in central Virginia). See my August post Sowing beets, radishes and kale, transplanting cabbage.

See Root Crops in August for more about fall beets. Beets can be tricky to germinate in hot weather, but to get good storable-sized roots, we need to get them established by 8/20. (Two months before our average first frost.)

Root Crops to Harvest in Central Virginia in March

From storage, if we still have them, we can eat beets, carrots, celeriac, kohlrabi, parsnips, potatoes, rutabagas, sweet potatoes, and turnips.

As in January and February in central Virginia, there are no roots to harvest outdoors in March except parsnips, Jerusalem artichokes and horseradish. We do have horseradish, but not the others, but we don’t have a lot of demand for that.

We have had outdoor night temperatures of 12°F/-11°C and 11°F/-13°C. This winter we had some carrots outdoors over the winter. We harvested them and got 150 pounds from 400 row feet. Not a high yield but they do taste good! They are Danvers 126. The intended sowing date was August 14, but we didn’t get the seed in the ground until September 5.

In the hoophouse our #4 radishes will get harvested during March. Our #5 radishes, sown 12/23, will then feed us until around April 7.

We still have some of our good size second hoophouse turnips until mid-March. We sowed those on October 25. The greens are a bit ragged now and less appetizing for cooking, although on cold rainy days, they make for more pleasant harvesting than any greens outdoors! Turnip greens (and Russian kale) are our last hoophouse greens to bolt, so we value them.  We need to harvest the turnips to make space to transplant our hoophouse tomatoes in mid-March.

Other Root Crop Tasks in Central Virginia in March 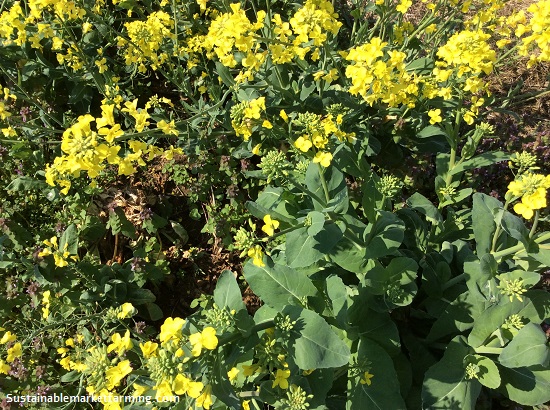 Next week I will provide information on avoiding, preventing and postponing bolting.