I’m back from the West Virginia Small Farms Conference, where I gave three presentations, including this new one, The Hoophouse in Spring and Summer:

Hoophouse in spring and summer 2017 Dawling from Pam Dawling

I ran out of handouts, and I know some people want to view the slideshow again, to catch the bits they missed. Before next Tuesday, I’ll upload The Hoophouse in Fall and Winter as well. Maybe even later today, if I get my more urgent tasks done first.

Yesterday I brought our seed sweet potatoes, which we’d selected and set aside at harvest-time, up out of the basement and into the greenhouse, to start growing them.  I wrote about growing sweet potato slips previously. The first step was to see if they float or sink. We save extra seed roots so that we can discard the less promising and still have plenty to grow. Sweet potatoes that float will grow better and yield higher. We had saved 100 roots for a goal of 320 slips. After removing a few rotten roots and discarding the sinkers, next I tested for white streaks, called sweet potato chimeras. I cut a small piece off the distal end (the string root end), not the stem end. The idea is to throw out roots with white streaks bigger than a pencil lead. I only found a few. It’s a genetic mutation that can occur at any time. Because sweet potato slips are clones of the mother root, if you propagate from chimeras you get more chimeras. I succeeded in my goal of having 80 good roots from each batch of 100. I set the cut roots in shallow bins in our germinating chamber to heal the cut surfaces and warm the roots ready for sprouting. In two weeks I’ll “plant” them in flats of compost and return them to the germinating chamber to start growing the slips. They’ll look like this:

Meanwhile the March issue of Growing for Market magazine arrived, and I found a fascinating article about a new method of growing sweet potato slips, from Anthony Boutard and Caroline Boutard Hunt. They write first about “discovering” sweet potatoes and then deciding to grow them, ordering 20 varieties from the Sand Hill Preservation Center.  Their propagation method involves cutting each slip into one-node pieces and growing a plant from each short length. This reduces the number of roots to set, which saves propagation space. The single-node cuttings are set in 50-cell plug flats, trimmed of their leaves and grown in the greenhouse for only two weeks before planting out in the field. This reduces the time caring for the young plants by a lot, which once again saves greenhouse space. They say “The resulting crop is better quality because all of the resulting tubers grow from a single node instead of several, concentrating the production. Better yet, there is absolutely no drawback to the technique, at least in our experience to date.” And then, this lovely sentence “Certainly no reason to keep it within the family.” I love the way small farmers share information and tips!

Amusingly, they refer to the method I have written about as “traditional sweet potato slip production”! When I was starting out propagating our own, I followed advice to use cold frames, which clearly doesn’t work in Virginia in March and April. I couldn’t figure how those methods could produce enough slips in time unless a huge number of roots were used to start them. I found out that growers were actually using electrically heated beds. I tried a soil heating cable but it was nothing like warm enough. I searched for more advice and found the Southern Sustainable Agriculture Working Group the previous year had an Organic Farmer Network, who were exchanging tips. Someone, I think Ellen Polishuk of Potomac Vegetable Farms, answered others’ questions about growing sweet potato slips with something like  “I just grow them in flats.” That was a lightbulb moment for me – I knew how to grow things in flats! It didn’t seem like it was the traditional method at that time, but it certainly worked, so I adopted it and spread the word. 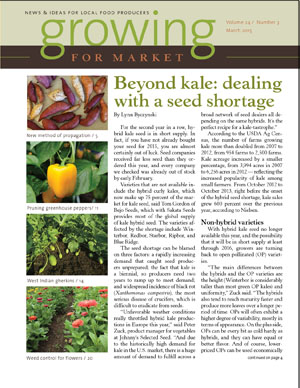 For this issue of Growing for Market, I wrote about West Indian Gherkins as a trouble-free alternative to regular pickling cucumbers. We’re growing them in our hoophouse this spring, on a trellis net.

Andrew Meffert continues his series on greenhouse nightshade crops for colder climates. This month he provides part two of his detailed work on greenhouse peppers: Pruning and training for maximum production all season.

Lynn Byczynski gives some leads on finding and enjoying farming podcasts, while we are sowing seeds, potting up or otherwise engaged in manual not-mentally-demanding work.

Gretel Adams offers information about weed control in cut flower fields, and of course, it’s equally useful for vegetable fields! Crop planning to rotate crops with different growth habits and timing; neighboring up crops that will have similar cultivation requirements; using the most suitable tractor cultivation equipment; co-ordinating spacing of crops to fit the different equipment (including hands!) to be used for sowing and cultivating. It all adds up to efficient weed control, and maximizing yields from the space.

The lead article is by Lynn Byczynski, and provides a warning about a shortage of hybrid kale seed for the second year running. This has been caused by an increased demand for kale (yay!), a widespread case of black rot disease (boo!) and the fact that the biennial nature of brassica seed production means it takes two years to ramp up seed production.

There are some great new OP kales out there. We have our eyes on Olympic kale, available from High Mowing Seeds.