I’m off to the Southern Sustainable Agriculture Working Group Conference in a couple of days. I’m presenting Intensive Vegetable Production on a Small Scale. At the link you can view a version of the slide show with lots of bonus material! (It was hard to cut the show down to 75 minutes!) I also had a lot of material on sustainable management of pests, diseases and weeds which I couldn’t even fit in the handout, so I’m posting that here.

The goal of IPM is to deal with problems in a systematic and least toxic way. Biointensive IPM goes further in emphasizing non-toxic methods.

There are four steps of IPM: prevention, avoidance, monitoring and suppression.

Diseases need a susceptible host and the presence of a pathogen and suitable environmental conditions. Plant pathogens can be soil-borne, foliar-borne, seed-borne, or a combination of seed-borne with one of the others.

A. Soil-borne pathogens can live in the soil for decades, so long crop rotations are needed. Club Root is one. Fusarium oxysporum and Verticillium dahliae are two soil-borne fungi. Fusarium survives a long time in soil without a host, and can also be seed-borne.

B. Foliar pathogens need foliage! They die in soil in the absence of host plant debris, so practice good sanitation. Late blight (Phytophthora infestans) is a good example of this type of disease: it does not carry over in the soil, on dead plants, the seeds or the stakes. Cucurbit angular leaf spot (ALS) bacteria (Pseudomonas syringae) overwinter in diseased plant material and on the seed coat

C. Seed-borne pathogens: Lettuce mosaic virus is an example of a disease in which the seed is the main source of the pathogen and if seed infection is controlled, the disease is prevented. Other seed-borne pathogens may start life as a foliar-borne or a soil-borne pathogen. Infected seeds will produce infected plants even in clean soil. Pathogens can infect the seed via several routes: The parent plant can become infected by drawing soil pathogens through its roots up into the seed; Pathogenic spores can float in on the air (Alternaria solani, early blight of tomatoes; Anthracnose fungus that affects nightshades, watermelon and cucumber); Insects that feed on the plant can transfer the disease (striped cucumber beetles vector bacterial wilt, which is caused by Erwinia tracheiphila); Insects that pollinate the plant can bring infected pollen from diseased plants.

Make a regular tour of your crops once a week to monitor growth and health. Keep good records. If you see a problem, identify it. Plant Diseases Diagnostic lab can help. The mere presence of a disease does not automatically require spraying. The economic threshold (ET) or action level is the point at which losses from the disease warrant the time and money invested in applying control measures.

Weeds compete with crops for sunlight, water and nutrients, and can encourage fungal diseases by reducing airflow. Too-frequent cultivation to remove weeds can leave the soil more prone to erosion. Each tilling or deep hoeing stirs air into the soil and speeds combustion of organic matter. Most weeds respond well to nutrients, especially nitrogen. If you give corn too much nitrogen, even as compost, its productivity will max out and the weeds will use the remaining nutrients.

First of all, I’ll get my confession off my chest. A savvy reader spotted an error in my book Sustainable Market Farming: Take a red pen and correct your copy!

Meanwhile, I can recommend two books on seed growing (that weren’t out when I wrote my book), that contain good information about which diseases are seed-borne. I reviewed the impressive The Organic Seed Grower by John Navazio a while back..

Newer is The Seed Garden: The Art and Practice of Seed Saving from Seed Savers Exchange and the Organic Seed Alliance. Including “advice for the home gardener and the more seasoned horticulturist alike”, this is also a book from people who work growing seeds, and know their stuff. I plan to review it one week soon (when the work pace slows a little!)
If you’re a seed grower, you might want to add one of these to your wish list. Both are beautiful books, as well as clearly written ones.
This year I am not doing quite as much seed growing as some years. For sale, we are growing Carolina Crowder cowpeas in our hoophouse. Click the link to see photos.
For ourselves, we are selecting and saving seed from our Roma tomatoes and Crimson Sweet watermelon, as well as West Indian Gherkins. We are also saving garlic and shallots for replanting.

It’s that time of year when I line up events I’ll be speaking at in the fall and winter (and to some extent, into spring). Here’s my plan so far: 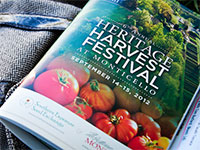 Friday and Saturday September 11-12 2015
Heritage Harvest Festival, Monticello, Charlottesville, VA.
On Friday, 1.30-2.30pm I will be offering one of the Premium Workshops, Crop Rotations for Vegetables and Cover Crops.
That’s at the Woodland Pavilion, Visitor Center.
Then I will be doing book signing at the tent called The Shop at Monticello (at the Visitor Center), 2.45-3.13pm.
On Saturday I will be offering another premium workshop, Producing Asian Greens. This one is at the Vegetable Garden Tent at the Mountaintop (where most of the Saturday events are). It’s immediately followed by another book-signing, 5.30-6.0pm. The Festival ends at 6pm. All day Saturday is packed with events, and a General Admission ticket will be all you need apart from tickets for premium Workshops.

I will also be signing books at the Mother Earth News Bookstore at some point and doing some scale demonstrations of string-weaving for tomatoes at the New Society Publishers booth.

The weekend of October 24-25 I plan to be at the Mother Earth News Fair in Topeka, Kansas with the two Hoophouse workshops. In February 2016, Mother Earth News is running their first fair in Belton, Texas.  Too soon for detailed information yet, but watch the site, if you live in Texas.

November 6-8 I will be at the Carolina Farm Stewardship Association Sustainable Agriculture Conference, in Durham, North Carolina. Click here for the Conference page. I’m doing two workshops, Cold-Hardy Winter Vegetables – on Saturday November7, 8.30-10am, and Succession Plantings for Continuous Harvests – on Sunday November 8, 10.45am-12.15pm. I will also do book signing at the BookSignAGanza, Saturday 5-6pm.

January 27-30 I will be at the Southern Sustainable Agriculture Working Group’s Practical Tools and Solutions for Sustaining Family Farms Conference in Lexington, Kentucky. On the website you can sign up for the e-newsletter and around October 15, you can do Early Bird Registration. I hope to be a speaker, but it’s too soon to say. . .

February 3-6, 2016 I will be at the Pennsylvania Association for Sustainable Agriculture Conference  at the Penn Stater Conference Center, State College, PA. Save the date.