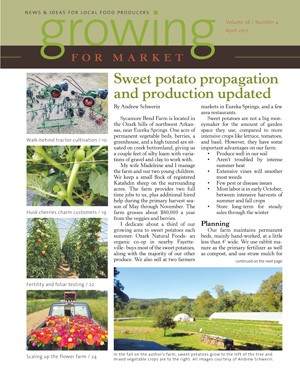 I’ve just got back from the Carolina Farm Stewardship Sustainable Agriculture Conference in Durham, NC. There were about 1200 people, five workshop slots, 12 tracks, lots of good, locally grown food, a whole pre-conference day of bus tours and intensive workshops, a courageous and inspiring keynote address from Clara Coleman on the joys and challenges of family and farm life. She and her two young sons are now living and working alongside Eliot Coleman (her dad) and Barbara Damrosch at Four Seasons Farm in Maine.

My sweet potato slideshow from my first workshop at CFSA is viewable above. Just click on the forward arrow. To see it full screen, click on the link below the image and then click the diagonal arrows when the new page opens. About 70 very engaged people attended that workshop. My other workshop was Sustainable Farming Practices for Vegetable Growers, which I’ll include next week.

I enjoyed meeting old friends, making new friends, learning some good tips about different drip irrigation parts, how to sharpen and use a scythe, how many years half the henbit seeds are viable for (23 years!!), and picking up literature from the trade booths to digest later. 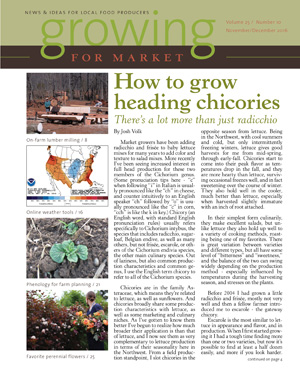 The November/December issue of Growing for Market is out, including my article about phenology. Phenology is the study of recurring animal and plant life cycle changes in relation to the weather. Some changes are temperature-dependent, rather than (daylength-) calendar-dependent. The opening of some buds and the emergence of some
insects from the ground are related to the accumulated warmth of that season. Observations of certain changes can be used to help growers decide when to expect outbreaks of certain insect pests and when to plant certain crops. For instance, we look to the leaves of the white oaks to decide when it is warm enough to plant sweet corn. The oak leaves should be as big as squirrel’s ears. We have plenty of squirrels! Phenology is especially useful when the weather is extremely variable, which we can expect more of as climate change gets us further in its grip.

Also in this bumper edition of Growing for Market are articles on growing heading chicories (Josh Volk), milling your own logs on your farm (Mark Lieberth), online weather tools for farmers (Eric and Joanna Reuter), 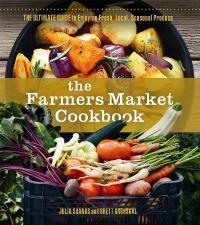 a review of The Farmers Market Cookbook by Julia Shanks and Brett Grohsgal (Andrew Mefferd), and favorite perennials for flower growers (Jane Tanner). There are also two pages of cameos of books available from GfM. A seasonal tip about gift giving, I think.

I am working on a review of Soil Sisters by Lisa Kivirist, which I will tidy up and post soon.

Ira Wallace, my long time friend and one of the members of Southern Exposure Seed Exchange has recently been awarded the 2016 Craig Claiborne Lifetime Achievement Award by the Southern Foodways Alliance. Sara Wood took photos at SESE and at Twin Oaks while preparing the SFA oral history interview with Ira Wallace. You can watch the video clip, read the transcript and ass the photos at the link. Well done Ira!