I’ve just been on an intensive conference hopping jaunt, three weekends in a row with not much time at home mid-week. One notion I heard discussed is the “Actionable Nugget”. It’s an idea you learn from someone else that inspires you as a possible solution to a problem or challenge you’ve noticed. I’m going to share some I picked up this month.

First I’m going to share my half-day presentation on Hoophouse Production of Cool Season Crops. To view it full screen, click on the diagonal arrows icon. Use the forward pointing triangle to move to the next slide. There are a lot! It was a full afternoon!

Here are some of the Actionable Nuggets:

I got this idea from a Year-Round Organic Vegetable Production workshop at the Virginia Association of Biological Farmers Conference. It was presented by Rick Felker of Mattawoman Creek Farms on the Eastern Shore of Virginia. Rick said that Asian long beans are a star crop for them, and  produce extremely high yields compared to outdoors. Yes, they need trellising, and yes, they need frequent harvesting.  On the plus side they are a legume, so they are adding nitrogen to the soil the whole time they are growing. At Mattawoman Farm, they harvest these from June to October.  In recent years we have not been growing bean seed crops in the summer hoophouse as we used to do. Last summer we grew Iron and Clay cowpeas as a cover crop, but were disappointed to need to cut them back every 6 days, because we’d decided not to stake them in any way.

At the Future Harvest Chesapeake Association for Sustainable Agriculture Conference, I much appreciated this workshop by Ray Weil. A whole workshop on one element! When deficient, the plant has symptoms resembling nitrogen shortage. It caused me to wonder how often I have made this mistake. Brassicas and legumes are the crops to pay closest attention to. I learned that the standard soil test for sulfur is fairly meaningless – I have been putting my faith in a poor source of information. The key piece of information from Ray Weil is that with a S shortage, the yellowing starts on the younger leaves, which is opposite to nitrogen shortages, when the yellowing begins on the older leaves.

S-deficient plants will be thin, spindly and slow-growing. The leaves will be high in nitrates, because the poor plant can’t use all the N it has absorbed from the soil. I already know from winter hoophouse growing that high levels of nitrate are not healthy. Legumes cannot do a good job of fixing nitrogen if S is too low. Sulfur shortages can affect the nutrient density of the crops, the protein level in beans. Now I know what to look for and what to do if I find the problem. Add 5-10 pounds per acre of S if plants seem deficient.

At the same FHCASA conference, I learned about cucurbit BER in a workshop by Emily Zobel. I had not known cucurbits could suffer from blossom end rot, which is a problem caused by limited calcium uptake, often in cold weather and when water supplies are too variable. I do see a little BER on our first hoophouse tomatoes to ripen, but the plants quickly grow out of it as the weather warms up.  The photos of young yellow squash Emily Zobel showed  looked just like what I have been thinking was lack of pollination!! Now I will need to see if encouraging the plants to take up more calcium can solve the problem. This “actionable nugget” arrives in good time for this growing season!

I also learned that duct tape can be used to remove squash bug eggs. (I’d given up trying)

From a workshop on Organic Soil Management for High Tunnels at the Southern Sustainable Agriculture Working Group Conference, presented by Krista Jacobsen, I learned some valuable tips about dealing with salt build-up in hoophouse soils. – she referred to hoophouses as “irrigated deserts”!

I also learned  about yellow shoulders on tomatoes. Previously I had read that the green/yellow shoulders were (unfortunately) genetically linked to good flavor in some varieties. At this workshop I learned that yellow shoulders (as opposed to green), can be a sign of potassium deficiency. Temperatures above 90F can also be a factor. The determinant hybrids have less of a problem than other varieties. Excess magnesium can be a factor, as can the choice of variety, a virus infection, pH over 6.7. Our pH isn’t over 6.7. Ideally, the grower would increase the magnesium to calcium ratio to 1:6 or 1:4, and/or increase the potassium. Perhaps we are short of magnesium. I will need to study our soil tests more carefully.

In this SSAWG workshop by Daniel Parson, I learned a technique for training newbies on weed control: Make them get down on the knees and point to and touch the crop plants before hoeing or pulling weeds. He says : “If you can see the weeds without getting down on the ground, you’ve waited too long! ” Weeds should be dealt with while tiny. Bring your trainees back in a week to to see the results of their hoeing. I like this idea! Too often it is hard for new workers to learn from their experience because they don’t study and critique their work as they learn!

Ellen Polishuk gave this workshop, and I went because I had both enjoyed and been challenged by Ben Hartman’s Lean Farm book. I wanted to hear someone else’s perspective and remind myself of the best bits. To my surprise, one idea that stuck out was to work in 90 minute chunks, with short breaks (or longer meal breaks). I’m not sure I fully embrace this idea, but I’m mulling it over. 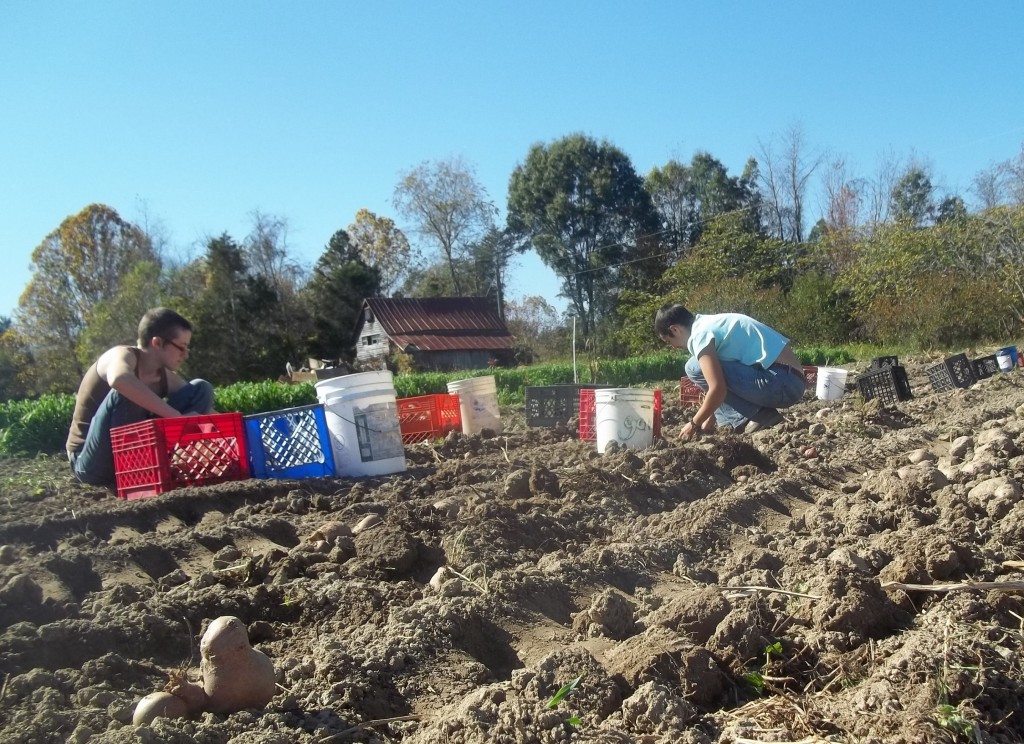 We got our June-planted potato harvest finished last week, and I counted the crates – 122. That makes 3660 pounds, a pretty good amount for the space we used. The Red Pontiac seem to have done a whole lot better than the Kennebec – the same result we got from our March-planted crop. One thought is that maybe the Kennebec seed pieces were cut too small, although I’d be surprised if the whole crew managed to do the same thing twice. 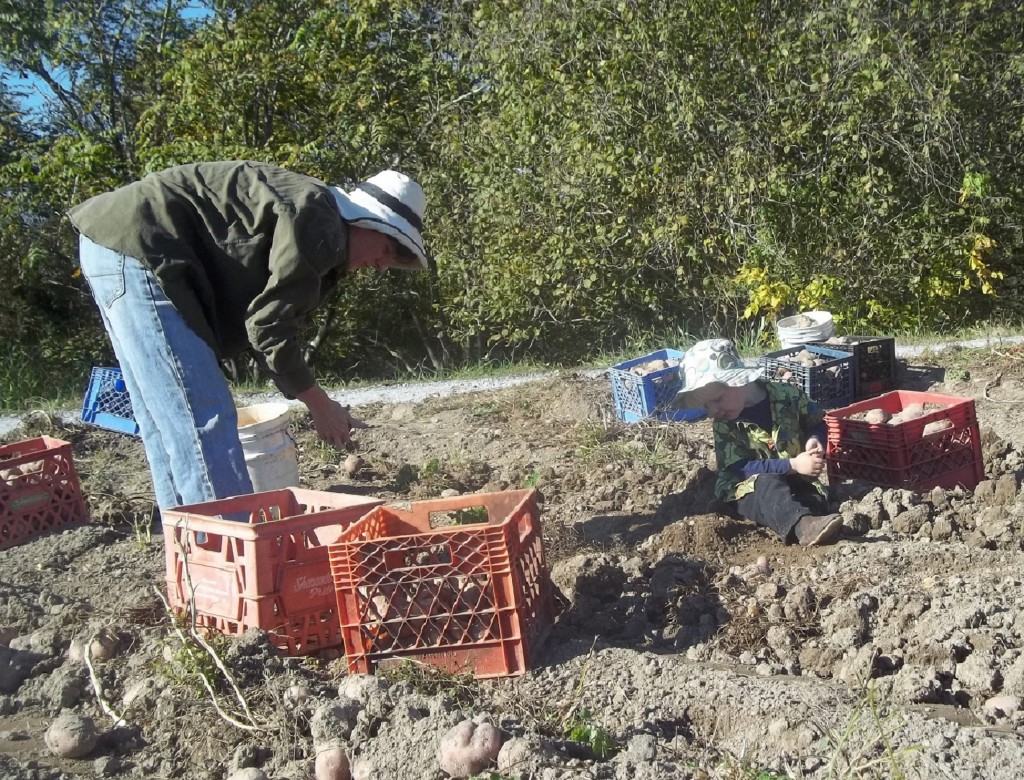 We use discarded plastic crates for our potatoes. They are lightweight, stack easily and don’t grow mold. We store our crop in our root cellar, which is built into the ground, a kind of constructed cave. Nice, fossil-fuel free and low-tech. And, like natural caves, it is prone to damp. It’s prone to mice too, but we have our organic solution to that problem: a black snake lives in there. We have been known to commandeer a snake, if none has chosen to move in. It’s a good winter home for snakes

We also tallied our Roma paste tomato harvests for the year. We gathered 313 5-gallon buckets. If we’d had more workers we could have harvested more. Our plan was to harvest the whole patch of 530 plants twice a week, but during the peak of the season we were lucky if we could get one half harvested each time.The plants stayed in good health throughout the season, and the fruit stayed a good size. This is thanks to the selection work I have been doing when we save our seed (Roma Virginia Select). Also thanks to drip irrigation we have reduced water splashing on the leaves, which can spread fungal spores.

Roma is a determinate variety, meaning the number of trusses (branches) of fruit is genetically predetermined, but as with many crops, the more you pick, the more you get. Leaving mature fruit delays development of immature fruit. I have not found anyone to tell me how many trusses of fruit Roma has, and despite growing 530 plants each year for over 20 years, I have never taken the time to count them. Maybe next year. . .

If you read descriptions of determinate tomato varieties, you would think they are all tiny plants with a three-week harvest window. Roma is a large determinate, at least 4ft tall, and our harvest period lasts from mid-July until frost (usually late October here). Our peak period is about a month (early August to early September). Here’s a general description from www.seedaholic.com: “Determinate varieties are generally smaller and more compact than indeterminate tomatoes. . .”

The Twin Oaks Garden Crew is getting ready to have our annual Crop Review meeting. We work our way down an alphabetical list of crops, noting what worked and what didn’t. And at the same time, we pop our garlic bulbs into separate cloves for planting.

My next speaking engagement is at the Virginia Biological Farming Conference January 30 and 31 2015, with pre-conference sessions on Thursday January 29. Online registration is now open. I’ll be presenting my workshops  on Asian Greens and Succession Planting for Continuous Harvests. Lots of other great workshops too, including from Jean-Martin Fortier. Follow the link to get to my book review of The Market Gardener.

If you looking for a chatty online group of homesteaders, try Earthineer or, of course, the Mother Earth News blogs (I write for the Organic Gardening Blog)