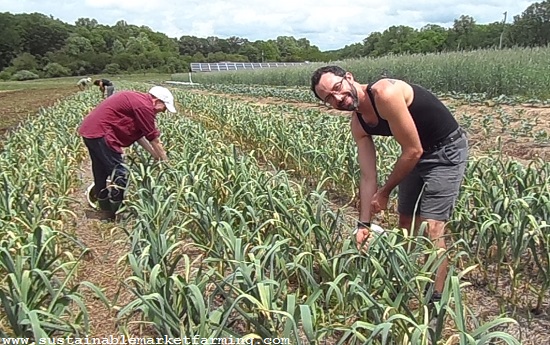 The seasons are changing, and I notice fewer people are searching my website for Winter-kill temperatures and more are searching for garlic scapes, and (sadly) sprouting green potatoes!

We’ve been harvesting scapes from our hardneck garlic for over a week now and have been tackling the sequence of tasks that scapes act as a prompt for:

This gives the garlic good airflow and helps it dry down (our scapes arrive 3 weeks before we need to harvest). I notice it’s earlier this year. We may be harvesting at the end of May, rather than in the first week of June. We need to clean and prepare the barn where we hang the garlic to cure, and service the box fans we use to help that process (our climate is too humid to cure alliums without fans). For a lot more about garlic throughout the year, see the “alliums” category of posts.

On a less happy topic, we have been puzzling over the difference between one bed of spinach (green) and another about 10 ft away (yellow)

We had two beds of transplanted Reflect spinach from the same planting that came out very differently this spring. One developed yellow older leaves, the other stayed green. Seizing an opportunity, we transplanted the troubled one (30W) directly after tilling, on 3/2, without allowing the turned-under weeds to decompose. We did spread compost before tilling. Although initially healthy, later the older leaves developed all-over yellowing (not just between the veins). The other bed (27W), transplanted 3/18, about 10 feet away, has stayed healthy and green, up until May 14. We’ve lost track of when it was tilled relative to planting. Or, because we had such wet weather, we might have broadforked rather than tilled. Both beds now have pointy leaves and are getting ready to bolt. No difference in that. Our other beds of spring spinach, transplanted 3/5 and 3/13 are between the two mentioned in color. Is the problem entirely to do with the decomposing weeds (and the micro-organisms they are feeding) tying up the nitrogen? It looks like that.

In an effort to save the yellow spinach, 30W was weeded around 5/2 and the bed was sprayed in the evening 5/3 with seaweed extract. It rained 0.1″ the night of 5/4 and again 5/5, then no more rain before the second set of photos 5/9 – could the seaweed have washed off before it could be absorbed? We did not add a spreader/sticker (soap) to the seaweed spray. There might have been overhead irrigation, which could have washed it off. We don’t remember when it was irrigated relative to the seaweed spraying.

We also don’t know if there were differences in transplanting techniques between the beds, but as both beds were transplanted by several people working together, we can probably rule this out.

In 2016 both beds had spring spinach (three year rotation).

30W (yellow) then had buckwheat, compost and late squash 7/18/16, followed by winter wheat.

In 2018 it had buckwheat and soy, compost and late bush beans 8/3, leaving weeds over winter.

In 2017 it had compost, spring turnips, buckwheat and soy, compost and lettuce in August, followed by weeds over the winter.

Total about 11 months of food crops.

Listen While You Work

Harold Thornbro of The Small Town Homestead interviewed me about hoophouses and you can listen to the interview here. It’s about 50 minutes. 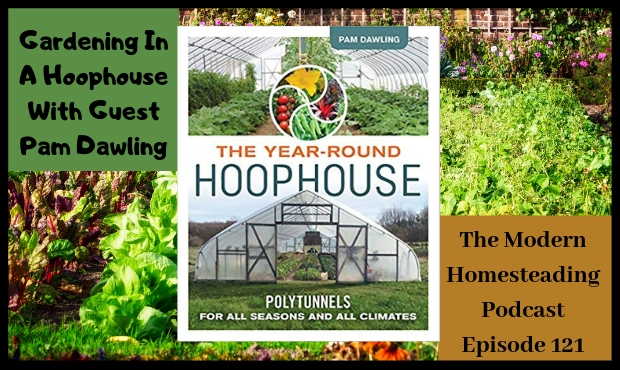 I also gave an interview for the Yale Climate Connections

This one is short (1 min 30 sec) and more about Twin Oaks Community than farming in particular.Play it directly above, or See the webpage here